Retrouvaille began in 1977 as a French language weekend for hurting marriages in the province of Quebec, Canada. It was adapted to English by the community in Toronto, who also revised and strengthened the contents of the weekend program and developed the post-weekend programs.

In 1982, Retrouvaille began to spread to communities throughout the United States and South America. In 1991, an international expansion of the ministry began in many other countries around the world.

Retrouvaille is a non-profit and all volunteer ministry that collectively impacts more struggling marriages and families than any other ministry in the world.

In 1977, Guy and Jeannine Beland, a Worldwide Marriage Encounter (WWME) presenting team couple in Hull, Quebec, Canada, became concerned about the struggling couples attending their local WWME Weekends.  An increasing number of those couples expressed a need for additional healing and help with their troubled relationships, concepts which were not being met by the WWME program. The Belands recognized that the Marriage Encounter experience did not adequately meet the needs of these couples with marriage challenges and it was determined a new program was needed.

The Belands presented the first Retrouvaille weekend in the French language in Hull in July 1977. They made a number of minor changes to the WWME Weekend outline and simply relied heavily on a more somber, healing spirit being present throughout the Retrouvaille Weekend. They realized that the minor change in content was not enough, but it was a positive beginning. All of those who have followed, thank God they did.

Early in 1978, Ian and Gobnait McAnoy, WWME Area Coordinators of Southern Ontario, learned of the Belands' efforts. Due to the deteriorating state of many marriages, especially in the populous metropolitan Toronto region, they were excited about the possibilities for this healing ministry called Retrouvaille, a French word meaning "rediscovery" or "the finding again."

A group of nine couples and four or five priests was formed to carry out the establishment of the English-speaking Retrouvaille program in Toronto. Word of this new healing ministry for struggling marriages spread quickly. The first Weekend in Toronto occurred in October 1978 and had 29 couples in attendance. The second, in December 1978 had 21 couples. Calls came from across Canada and upper New York. In the first 24 months of existence, two Weekends were presented in Sudbury, in northern Ontario, in addition to 17 Weekends in the Toronto area averaging 25 couples per weekend.

It was determined that Retrouvaille was a "viable, valuable and very necessary ministry”, and that Marriage Encounter and Retrouvaille clearly had distinct and different mission calls. It was decided that “Retrouvaille must cease using the WWME outline and overview at the earliest possible time, and that current WWME couples must decide in which apostolate they wished to continue to work". With a gift of $1,000.00 seed money from WWME, Retrouvaille was set free "like any young bird...and urged to fly on its own”.

Bruce and Marg Bridger and Fr. John Vella assumed leadership of Retrouvaille in September 1980. The program was scaled back to only four weekends in 1981 in order to focus on the development of a new program format. An existing program for troubled marriages, Etre Un Couples (To Be a Couple), was already available in French to couples in Quebec City, Quebec. It consisted of a Weekend and follow up phase. Jacques and Jocelyne Gagnon, Coordinators of the program, agreed to a one-day meeting in Montreal with the Bridgers to share valuable insights and exchange ideas and information that could be used to develop the new Retrouvaille program. A group of Retrouvaille couples attended Etre Un Couples and brought the experience back to Toronto.

In May 1981, Retrouvaille couples formed a committee charged with the task of developing a new Retrouvaille outline. Both Weekend and Post Weekend outlines were completed within nine months. The first Weekend under the new Retrouvaille outline was presented in February 1982. Upon completion of the outline, the Bridgers and Fr. John Vella became the first Retrouvaille Expansion Coordinators. In 1982, training programs were presented in Canada in Halifax and British Columbia and in the United States in Illinois and California. Expansion efforts in 1983 focused on the Washington, D. C. and Maryland area alone, leaving valuable time for development of the mentality/insights section of the outline.

Of those early years, Bruce and Marg Bridger write, "We prayed more earnestly for Our Lord to instill greater confidence in our hearts, to give up our desire to control everything and to trust more in His plan”.

"We also invited Jesus to be present among us and to help us to be aware of His presence and His role on the team. We prayed that He would increase our compassion and our willing generosity in offering up these hours away from our families or other activities. We asked our Heavenly Father to provide us with the guidance and direction we so badly needed along this unchartered course. We prayed that the Holy Spirit would grace us with the wisdom and discernment needed during those deliberations and decisions. God's response to our petitions is most evident in the resultant program documentation. We have stated often and to many that we are truly amazed at the content of the Retrouvaille program manual. Surely all this wisdom did not come from this relatively unqualified group of seven people. No, we have not the slightest doubt that this is God's work put on paper through us”. 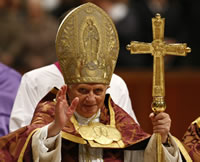 The Bridgers further stated, "Hopefully, we have been able to establish the existence of two central themes which prevail in the Retrouvaille ministry. These themes are fundamental to our Christian heritage and emanate from our baptismal commission. The first one is MISSION as stated in the scripture quotation 'As the Father sent me, so I am sending you' (John 20:21), and reinforced by Jesus many times through His public life: 'You are the light of the world . . . In the same way your light must shine in the sight of men, so that, seeing your good works, they may give praise to your Father in Heaven' (Mt. 5:14-16). The second is SERVICE with humility: 'So with you: when you have done all you have been told to do, say, "We are merely servants: we have done no more than our duty" (Lk. 17: 9-10) May it ever be so.

In September, 2008 His Holiness, Pope Benedict XVI, granted a private audience to Retrouvaille. At that audience, His Holiness gave a fifteen-minute address, calling Retrouvaille servants “custodians of a bigger hope for the couples who have lost it”.